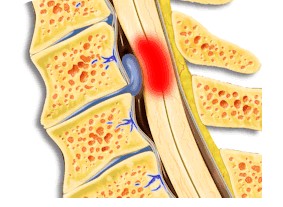 Neck pain due to cervical spine and related disorders is a common and often debilitating problem and an important reason for seeking medical attention. It often arises without relation to a specific activity or neck trauma. Such is often the case with cervical myelopathy.

We will consider what is often termed cervical spondylotic myelopathy which is a degenerative spine condition with symptoms of neck pain, numb and/or clumsy hands, gait difficulties, sphincter dysfunction, and impotence. We will be somewhat repetitive with symptoms, however, it is important to recognize some of the early indications and be aware of the different findings as many of the symptoms are typically not associated with neck problems. Progressing or advancing symptoms most often require a surgical consultation. 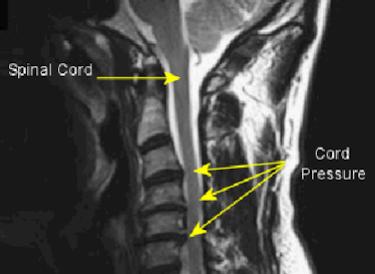 Cervical spondylotic myelopathy is the result of narrowing (stenosis) of the cervical spinal canal by degenerative and/or congenital (formed at birth) changes. Degenerative myelopathy is the most common type of spinal cord dysfunction in patients older than 55 years. The onset is usually subtle, with long periods of fixed disability and episodic worsening. The first sign is commonly gait spasticity or difficulty in walking, followed by upper extremity numbness and loss of fine motor control in the hands.

1) Static factors include: congenital spinal canal stenosis, disc herniation – central type herniations, osteophyte (bony outgrowths or arthritic spurs) of the spinal bones, degenerative outgrowth of the uncovertebral joints at the back of the spinal bones and facet joints, hypertrophy (thickening) of ligaments along the spine (flavum and posterior longitudinal ligaments).

2) Dynamic factors are abnormal forces placed on the spinal column and spinal cord during flexion (bending head forward) and extension (bending head backward) of the cervical spine. An example would be the trauma caused to the spinal cord by repetitively being compressed against a degenerative outgrowth during normal flexion and extension of the cervical spine. Mechanical compression of nerve tissue is only one of the pathologic mechanisms. Another is spinal cord ischemia, which happens when degenerative elements compress blood vessels that supply the spinal cord and nerve roots. 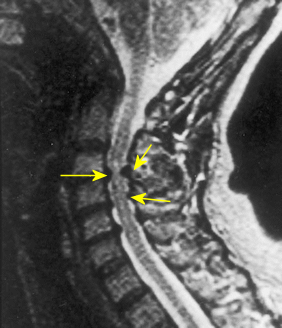 This narrowing in the lower back (lumbar canal stenosis) may produce only radiculopathy (pinched nerve) because the tip of the spinal cord called the conus medullaris is at the level of L1-L2, however, other leg symptoms may occur. Cervical (neck) canal stenosis can produce a sometimes complex picture of cervical myelopathy and radiculopathy.

Proprioception is also impaired. Proprioception describes the sensations generated within the body that contribute to awareness of the relative orientations of body parts, which are fundamental to the normal control of human movement. Therefore, myelopathy can cause impairment of postural stability.

With pressure on the spinal cord, there is a compromise of the blood vessels and the symptoms vary depending on the site of this ischemic damage to the cord. Patients often complain of clumsy or weak hands or feet that may be hypersensitive. Tingling fingers and leg stiffness are also common complaints. Examination may reveal deep touch, vibration, joint movement awareness and the ability to sense 2 points on the skin surface may be disturbed. Patients may claim they cannot feel a cold floor or hot water in the tub. There may also be spasticity with weakness of the upper or lower extremities. Movements may slow down, finger extension may be incomplete, and wrist extension may be exaggerated.

Symptoms can include: Pain in the neck, subscapular area, or shoulder. Numbness or altered sensations in the upper extremities. These are usually nonspecific, although specific sensory complaints can occur from a coexisting pinched nerve or radiculopathy. Sensory changes in the lower extremities. Motor weakness in the upper or lower extremities. Gait difficulties. Many patients have what is called a spastic gait which is a broad-based, hesitant, and jerky movement, compared with the smooth rhythmic normal gait. 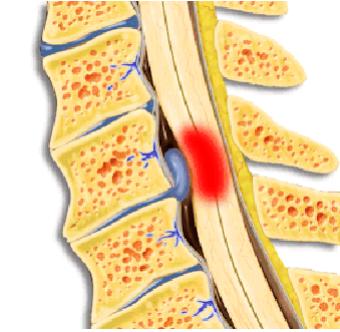 There is a diffuse or more widespread picture of disturbance rather than a dermatomal type, which is more circumscribed to particular areas.. The pain tends to be constant, burning, and involving the lower extremity. It may be described as cold with tightness and is ascending or from the bottom up rather than typical radicular pain, which is descending or downward as in a pinched nerve or herniated disc.

It is important to get a complete examination and for a qualified health care professional to differentiate a peripheral neuropathy, cauda equina syndrome, and myelopathy. To further illustrate the importance of a thorough examination, although the names may be unfamiliar, the differential diagnosis (other conditions which may present similar symptoms) includes multiple sclerosis, transverse myelitis, progressive motor neuron disease, subacute combined degeneration, syringomyelia, spinal cord tumors, cerebral hemisphere disease, peripheral neuropathy and normal pressure hydrocephalus. It may also be related to dropped head syndrome.

Additional findings: Muscular tone in the legs will be increased, Deep tendon reflexes in the knee and ankle will be accentuated (hyperreflexia), Forced extension of the ankle may cause the foot to beat up and down rapidly (clonus), Scratching the sole of the foot may cause the big toe to go up (Babinski reflex) instead of down (normal reflex), Flicking the middle finger may cause the thumb and index finger to flex (Hoffman’s reflex), Compromised coordination may be evidenced by difficulty walking placing one foot in front of the other (tandem walking).

Shooting pains into the arms and legs like an electrical shock, especially when bending the head forward (neck flexion) is known as Lermitte’s sign. Neck flexion can produce paresthesia (altered sensations), usually in the back, but sometimes into the extremities. Lhermitte’s sign is most commonly associated with an inflammatory process such as multiple sclerosis, but it is sometimes noted with spinal cord compression.

You should have an understanding of the causes and symptoms. It is important to understand that neck problems may cause symptoms that extend beyond a local area and recognize these symptoms in yourself and others so that prompt attention can be addressed. While home care products can help with relief; the worse the symptoms, the more likely surgery is necessary and there may be negative consequences for delay.