Sacroiliac Joint Pain May Cause Symptoms In The Lower Back, Pelvis & Leg

The sacroiliac joints are formed by the connection of the triangular bone called the sacrum and iliac bones on either side of the sacrum.

The sacrum sits at the base of the spine, directly below the lumbar spine. This connection with the lumbar spine forms the lumbo-sacral joint, typically noted as the L5/S1 joint where the last disc sits in between. It is a common area of disc herniation, facet joint problems as well as sacroiliac joint pain.

The 2 joints formed by the connection of these 3 bones do not allow a great deal of motion like your finger joints, basically about 4 degrees of rotation and 2 mm of shearing motion. The pelvis or pelvic region has a great deal of motion and this comes from the lower back and hips, rather than the SI Joints.

The joints need to be strong and properly supported in order to help support the body weight and this places a great deal of stress on them which, over time, can cause wear and tear of the cartilage, which protects the joints which function as shock absorbers, and sets up an environment for arthritis. This type of arthritis is often osteoarthritis and can cause degeneration of the joints and inflammation, similar to that found in other areas of spinal bones called degenerative disease of the spine.

Pain related to the sacroiliac joints are noted as dysfunction, joint syndrome, sprain, strain, arthritis, misalignments and inflammation. The joints are covered by a cartilage layer to provide protection and smooth motion between the joints. Damage to this cartilage from injury or arthritis causes the bones to have direct contact and rub against each other. This can cause pain and inflammation. The resulting altered motion can cause a compensation with strain on other structures having to take over the function of supporting the joint. 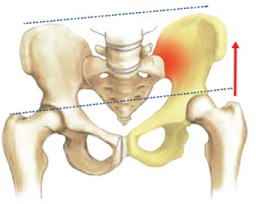 The sacroiliac joint may be indirectly affected by conditions which alter normal walking and standing mechanics. There are conditions which alter the length of the legs, either from misalignment of the joints, muscle spasm, an actual longer or shorter length of the leg bone, as well as problems with joints below like the hips, knees, ankles and feet. This can lead to SI joint pain as well as lower back pain.

Typically, during pregnancy, hormonal changes produce a relaxing of the ligaments around the pelvis in preparation for delivery. This loosening of the ligaments, along with the extra weight and alteration of posture can place stress on the sacroiliac joints. The excessive motion can cause sacroiliac pain and inflammation, usually thought of as back pain during pregnancy.

As damage occurs to the joint allowing altered and excessive motion, there is a tendency towards joint pain and inflammation as the it becomes unstable. Stabilizing the joints helps provide relief from pain. For example, a condition called ankylosing spondylitis affects the joint by causing inflammation and excessive motion which produce pain. As the condition progresses, the joints fuse together and the pain stops. Other conditions which relate to arthritis affecting the joints are gout, psoriatic arthritis and rheumatoid arthritis, which must be included in the differential diagnosis.

Sacroiliac pain may come on gradually and is usually felt on one side, but pain on both sides may occur even if only one side side affected. It is often related to a simple motion that combines bending forward, tilting of the pelvis and twisting the trunk like a short golf swing, shoveling snow, bending and reaching sideways or getting up sideways out of a soft chair. Pain may or may not be present in the lower back, but some degree of pain is usually felt in the leg or thigh. Pain may be minor or incapacitating and can be made worse by bending forward, putting on shoes, crossing one leg over the other, getting up from a chair or out of bed.

A typical history described by an individual with sacroiliac problems is pain that is worse when standing or walking and improves when sitting or lying down. Sitting can help stabilize the joints and lying down takes the gravitational or weight bearing strain from the joint, providing relief. 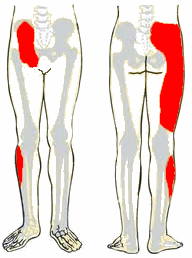 Most often, sacroiliac pain is the predominate symptom. This pain may occur directly in the SI Joints or be referred to the low back, hips, thighs and even into the groin region. This can cause confusion related to the source of pain. It is estimated that approximately 25-30% of lower back pain is related to sacroiliac joint problems. A health care provider can perform orthopedic tests to try to isolate the source of pain by stressing certain regions which reproduce the pain.

In addition to the history of complaints and orthopedic stress tests, imaging studies may be taken to visualize the areas of concern. CT scans and x-rays help visualize the bones and joints, helping to determine the extent of damage or fusion of the bones. An MRI may be taken to help visualize the softer tissues such as ligaments and muscles, as well as any small fractures and inflammation present. Bone scanning visualizes bone activity which may be increased with arthritic conditions, tumors in the bone or infections.

A method which is often used to determine the cause of sacroiliac joint pain uses injections of pain relieving chemicals and/or anti-inflammatory medications like Lidocaine and Cortisone. This produces pain relief from an anesthetic affect and by decreasing inflammation. With pain relief upon direct injection into the suspected joints, it can be determined that it is the source of pain. With no relief, other areas must be considered. The pain relief from injections may last weeks or months, however, it is a method that can determine if the SI Joint is the pain producing structure.

With manual orthopedic stress tests, we can reasonably assume that when these are negative to reproduce symptoms, the sacroiliac joint can be ruled out as a source of pain. Out of the six possible stress tests, the distraction and thigh thrust tests offer the highest specificity and sensitivity. When these two tests reproduce the patient’s symptoms, no further stress tests are necessary.

Injections serve not only to assist in the diagnosis of pain, but also in treatment as stated. Anti-inflammatory medications taken orally can be useful to help reduce inflammation. These include typical prescription and over the counter agents like ibuprofen or a short course of steroids, according to your health care provider’s advice and/or prescription.

Therapy can be directed to address the problem. Depending on the determination of too much or too little movement, exercises, therapeutic agents to minimize swelling like ice, heat and massage can be employed. Manual correction of misalignments directed at the lower back, SI joints and pelvis may provide relief. An shoe orthotic for a short leg may help to stabilize the region, as well as a supportive sacroiliac belt, which produces stabilization and helps to prevent further injury and inflammation.

Treatment often depends on proper assessment. It can be challenging when there are no specific causes identified like pregnancy, where ligament laxity is established, direct trauma to the joint, or disease such as ankylosing spondylitis, where blood tests for human leukocyte antigen B27 (HLA-B27) and imaging (sacroiliitis on x-ray/MRI) are specific for diagnosis.

Manual tests can determine the joint as a source of pain.

Typical explanations like an unstable pelvis can be a curious statement. I often hear things like therapists saying you have instability, then mobilizing the joint for treatment along with stabilizing exercises. So, if it is unstable and I need to do exercises to stabilize because I have a weak core, why are you mobilizing or moving it around?

When adjusting, it is a multidimensional biomechanical advantage considering the articulations with the last lumbar vertebra and the 2 pelvic bones, as well as specific muscular involvement, and not simply that the pelvis goes out of place and we push it back in. This leads to patients worrying about doing things that will push it out of place and can inhibit beneficial motion and induce anxiety.

When the above methods, considered conservative treatments, fail to produce reasonable results, surgery is an option for continued pain which affects activities of daily living, interfering with function. This often consists of fusion by removing any damaged cartilage and fusing the bones using special surgical materials. The bones eventually grow together, eliminating motion and associated sacroiliac joint pain. 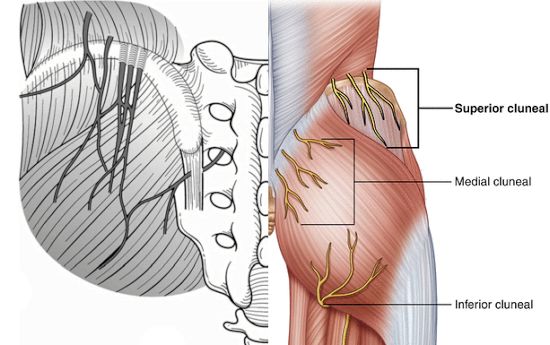