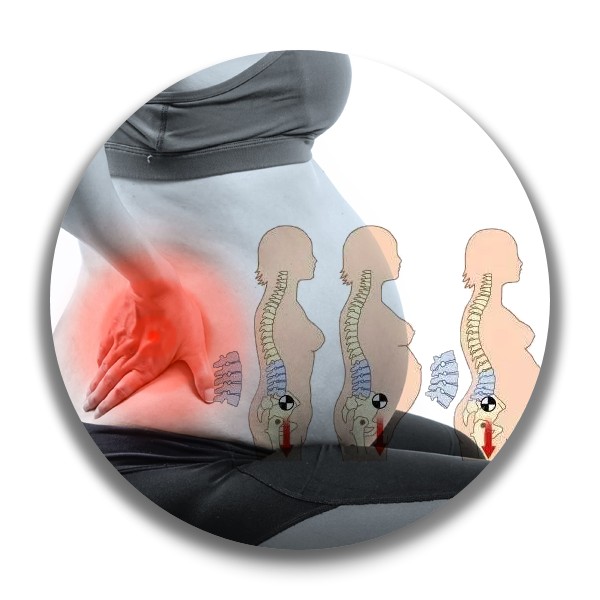 The High Prevalence Of Pregnancy Back Pain Suggests That It Is A Major Public Health Issue.

Back pain during pregnancy is mostly regarded as normal and is expected to spontaneously disappear after delivery. Half or more of pregnant women report pregnancy back pain at some time during maternity, and it is also a common reason for sick leave. 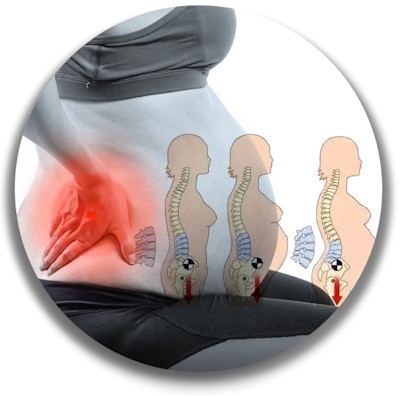 Low back pain and pelvic pain is a common symptom during pregnancy, and the prevalence has been reported to vary from 24% to 90% in different studies.

In one third of pregnant women, back pain is a severe problem compromising normal everyday life. Peripartum pelvic pain interferes with most activities of daily living and with intimacy. Back pain in pregnancy occurs twice as often in women with a history of back pain and women who have been pregnant previously.

Younger women tend to have increased risk for back pain. Occurrence of pelvic pain is associated with twin pregnancy, first pregnancy, larger weight of the fetus, forceps or vacuum extraction, and a flexed position of the woman during childbirth. Women who experienced pelvic pain during a previous pregnancy report a relapse in 85% during a subsequent pregnancy.

Women experiencing pelvic pain during pregnancy have been found to have normal height and weight and normal weight gain during pregnancy; however, body mass index has been reported to be significantly increased among first pregnant women with low back pain.

What Causes This Pregnancy Back Pain?

Although pregnancy back pain and pelvic pain is a most common complication of pregnancy, its cause is unknown and the mechanism is poorly understood. Some models propose increased spinal load and decreased stability in the pelvic girdle as major causes. Increases in abdominal diameter, fetal weight, and muscular dysfunction have been found to be associated with lower back pain and pelvic pain during pregnancy.

Some authors consider back pain and pelvic pain to be a normal condition of pregnancy. The symptoms may vary highly, and individuals are affected to different degrees. Nevertheless, referring to the actual scientific knowledge, this condition should be considered a complication of pregnancy for women with substantial impairment. For a small proportion of the affected women, the symptoms will not regress, and instead, the condition may progress into chronic low back pain and pelvic pain after pregnancy. 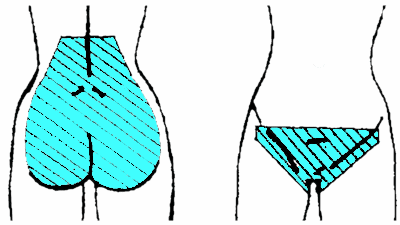 There is a lack of a uniform classification of low back pain and pelvic pain during pregnancy. Low back pain is commonly defined as pain referred to the area between the twelfth rib and the gluteal folds. This anatomic area also includes the sacroiliac joints, which probably can be considered as a separate functional entity in the pathophysiology of pain in the pelvis. Other terms that are used are posterior pelvic pain, pelvic pain, pelvic girdle relaxation, and pelvic joint instability.

The changes relating to back pain are often mechanical strains from the enlarging uterus and the compensating lumbar lordosis (increase in curve). Weight gain along with laxity of the ligaments can impede normal anatomical and biomechanical function. The resulting increase in loading is often focused on the lumbar discs and increased back strain is also placed on the muscles.

Are Pregnant Women At Higher Risk Of A Herniated Disc?

What Are Risk Factors For Pregnancy Back Pain?

Educational strategies, such as ergonomics, learning correct posture to reduce stress on the spine. Braces that ensure correct body posture are also available. Rest scheduled during the day is helpful to relieve muscle spasms and more acute pain. Both feet should be elevated, which flexes the hips and helps reduce the lumbar lordosis.

If these measures for pregnancy related back pain are not enough, studies indicate pregnant women with lower back pain that also participate in reasonable physical therapy have less pain, disability, and a higher quality of life. Therapy often includes stretching, strengthening, and self-mobilization techniques. Flexion increases strength of the abdominal muscles and decrease the lumbar lordosis, while extension increases strength of the paraspinal muscles. These are often accomplished with water therapy or Yoga.

Pregnancy can be difficult time when pain is experienced. How much the pain was related as a causal factor of increased psychological vulnerability translating into postpartum depression is not indicated, however, early treatment and education should be indicated to help ease anxiety and discomfort. Professional counseling should always be considered in concordance with symptoms, treatment response and results of any appropriate assessment questionnaires.

At least one of three complaints was reported by 38% of women; taking a long time to fall asleep (23%), waking up too early (47%), and lying awake most of the night (14%). Moderate or severe complaints were reported by (21%) and were associated with pregnancy related physical symptoms, like back pain and pelvic girdle/cavity pain. Only the association with pelvic cavity pain remained significant after adjustment for depression.

So, using good body pillows and/or a side sleeping pillows is a recommended method to assist comfortable side sleeping, which is better for your baby after 28 weeks of pregnancy. Leg pain may be due to varicose veins.

Fortunately, there are many ways to increase the strength of this muscle. The above example (Glute Bridge) is just one. Raise and hold as long as possible without pain, then gradually increase hold time. Keep your spine straight and knees together.