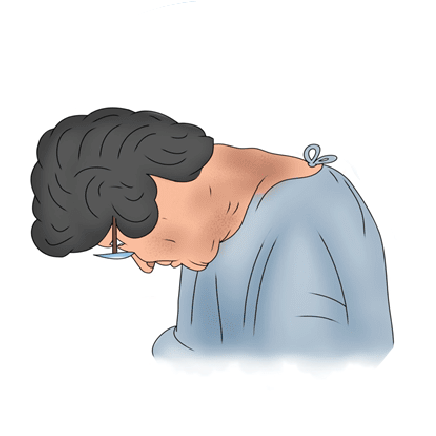 Dropped head syndrome causes a recognizable deformity with varying degrees of “chin on chest” posture. There is usually weakness of the neck muscles that results in the head dropping forward, sometimes called ptosis of the head. The fixed flexion or forward bending of the neck is often painful, interferes with feeding and horizontal eye gaze. The head is typically able to be passively ranged or moved up by hand. 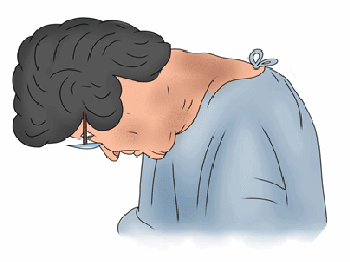 It is most often associated with problems of the nerves and/or muscles, however; in some cases there is no obvious cause even after extensive evaluation, or muscle biopsy may indicate a cause that is isolated to the neck extensor muscles and non-inflammatory. These cases are called isolated neck extensor myopathy or may be described as idiopathic head ptosis, where neck muscle weakness is the only symptom.

There are many potential and varied causes: central or peripheral nerve disorders like myasthenia gravis or Parkinson’s disease, autoimmune problems of muscle and connective tissue such as polymyositis and systemic sclerosis; they may be systemic and progressive with a poor prognosis like amyotrophic lateral sclerosis (ALS).

The most common cause of dropped head syndrome is isolated neck extensor myopathy and may have a benign clinical course.

The 4 Most Common Causes Of Dropped Head Syndrome

Finishing out the remaining (28%) of the top 20 causes of dropped head syndrome in descending order of prevalence as above. The percentages are not included, but decline rapidly from 5% to 1%:

It is both a challenging and complex condition to diagnose and treat. Management necessitates comprehensive multi-disciplinary diagnosis to ascertain the primary cause. Many of the conditions are medically treatable and it is possible that the deformity can be decreased to an acceptable level. Conditions like Parkinson disease, inflammatory myositis, and secondary myopathies related to endocrine or metabolic dysfunction may show substantial improvement with medications. Other causes resulting in structural changes like radiation fibrosis may respond poorly to medical treatment.

The best treatment methods are often vague and based on case reports. For symptoms that persist even with treatment of an underlying pathology, steroids, bracing and strengthening exercises with other conservative forms of physiotherapy are suggested and surgical options as a viable last resort.

Options for orthotic stabilization and varying degrees of correction of dropped head syndrome include removable hard or soft collars, corset or vest combinations, banding systems, and special wheelchair headrests. While some may offer a type of nuromuscular re-education toward correction or prevention of atrophy, these devices are often only a temporary or partial solutions, achieving long term satisfaction only in select patients. However, they can help maintain horizontal gaze/eye contact, assist in proper feeding, facilitate other daily living activities and improve quality of life.

While head supports may be cumbersome, irritate the skin, and may cause further deconditioning or deterioration of neck muscles, they should be instituted early. Why? Because a secondary deformity due to compression, neck muscle contractures or degenerative changes may result in conditions like cervical myelopathy and neurological decline that contributes to disability, even after reasonable recovery of neck strength. This highlights the importance of attempts to maintain proper neck posture during the period of weakness.

Fusion from C2 to T2 is promoted to preserve motion in the upper cervical spine, while extending the into the thoracic spine to minimize thoracic kyphosis which moves the center of gravity of the head forward and can contribute to fatigue of the the neck extensor muscles.

The study indicated response to medical and immuno-modulatory therapy treatment in over 70% of patients, and surgery was was an independent predictor of a positive clinical outcome. Fusion across the cervicothoracic junction was a primary factor to success of the surgery and to minimize complications and/or revision surgery resulting from limiting fusion to the cervical spine alone. 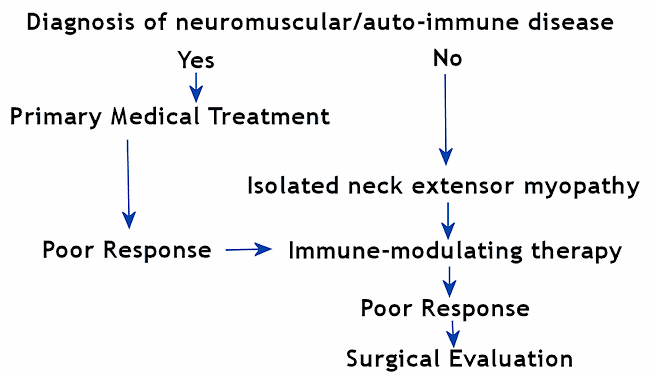 53% of patients responded to treatment and those reporting neck flexion weakness and limb weakness on physical examination were associated with good response to treatment. 89% of patients had abnormal pulmonary function tests, 50% abnormal swallow evaluation, 37% abnormal electrocardiogram and 13% abnormal transthoracic echocardiogram.

The authors did not include those with neuromuscular disease and defined dropped head syndrome as a chin on chest deformity in a natural position with difficulty maintaining a horizontal (forward) gaze in the upright position for even a few minutes, and the deformity was correctable in the supine or back lying position.

They indicated the pathologies of acute (up to 3 months) and chronic onset (greater than 3 months) would be different, with chronic onset more related to degenerative muscle weakness. They concluded, acute onset, balanced global side alignment, and no history of cervical trauma are likely to have a chance to recover by conservative treatment.

Significant improvement was noted after 4 months. Duloxetine is usually prescribed for chronic neuropathic or musculoskeletal pain including depression. The authors indicate a potential disequilibrium of neurotransmitters such as dopamine, serotonin, and noradrenaline in these patients and this drug should be considered as one of the optional treatments. The authors noted 4 other cases that were treated successfully with this method.

In this case, manipulative therapy was used in conjunction with an inflatable air pump cervical collar to maintain neck posture and to relieve nerve pressure at home, neck extensor exercises and electrical muscle stimulation. The dropped head state was almost corrected and neck pain was fully resolved near the completion of treatment at 3 months.

With cellulitis, bacteria enter the skin and may spread rapidly. The skin may appear swollen, red painful rash that may be hot and tender with scabs and blisters. One may experience tenderness and a dull achy pain. Without treatment with an antibiotic, cellulitis may be life threatening.