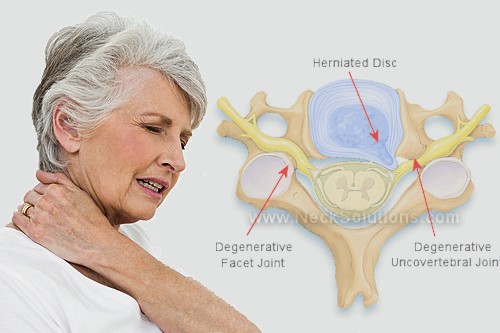 Cervical Spondylosis Mainly Results From Aging, But Posture Can Also Play A Role

Cervical spondylosis is commonly found as a progressing condition associated with aging and degeneration of spinal structures. Genetic factors have been shown to play a role in early development, as well as poor postural habits and muscle weakness.

The definition of cervical spondylosis osteophyte formation of the vertebra (spinal bones) resulting from degenerative disc disease. Osteophytes are abnormal bone growths, often forming bone spurs. Early onset features degeneration of the disc material as they lose fluid that provides proper nutrition. The fluid loss allows the disc to dry out and this process is called “desiccation”.

This results in a decrease in the height of the disc and has a negative effect on the function of the disc which is to provide protection to the sensitive nerves and spinal cord when weight is applied (loading). This weight can be when lifting objects, bending and other motions which stress the discs, and even just the normal body weight.

When you are born, the disc is optimal as the center, soft part (nucleus pulposus) contains 70 to 90 percent water, however, this reduces over time as you age. The reduction of water results in a change from the normal appearance and becomes a dark mass of fibers causing dysfunction in the ability to maintain adequate spacing between the spinal bones and compromising the foundation, similar to a house.

As the disc degenerates, the decreased height of the causes the supporting structures like ligaments to become slack. The added pressure on the disc produces bulging of the disc, and the ligaments will begin to buckle leading to further instability both mechanically and structurally, as the support weakens. The loss of support to the main part of the spinal bone results in the force being placed upon bony structures which were not designed to absorb loads. This forces the transferring of weight to be loaded on the facet joints, which are more in the back of the spine and the uncovertebral joints which are on the sides of the vertebral bones.

The facet joints start bearing weight, the normal function of a healthy disc. Since the facet joints are made for gliding between the bones and not loading weight, they react by forming bone growth in attempts to strengthen the area, kind of like a callus. This process is called hypertrophy and the facet joints become hypertrophic. This also leads to a ligament along the inside of the vertebra (posterior longitudinal ligament) to become hard and bone-like. Just like a house, when the foundation goes, it places more stress on the walls which are not meant to support the weight of the home. The walls will crack and the roof may buckle. We can sure up the walls, building up spackling/putty or nailing in boards (osteophytes), however, the foundation continues to degenerate. 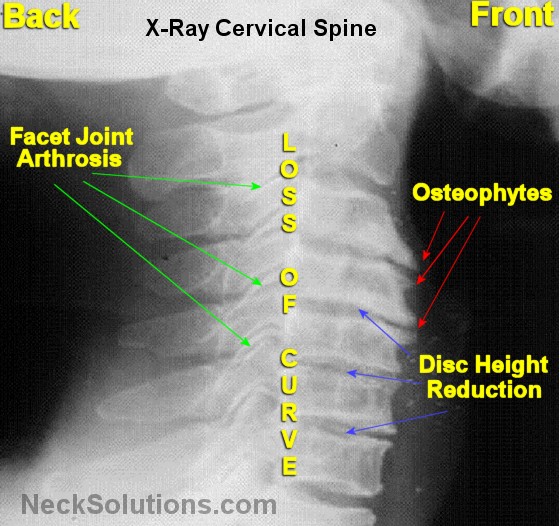 There are 3 primary symptomatic conditions that arise from cervical spondylosis: neck pain, cervical radiculopathy, and cervical myelopathy. Both neck pain as well as radiculopathy (nerve root involvement or pinched nerve) usually run a course of progression from acute through chronic conditions as a result of worsening degeneration. Cervical myelopathy affects the spinal cord mainly in the older population and produces symptoms, in addition to neck pain, that go below the shoulders and may produce shock-like pain including numbness in the arms and/or legs. Cervical myelopathy features a more long standing problem which can be permanent with a poor outlook.

The neck muscles have muscle spindles related to this proprioceptive system and play an important role in maintaining static (still) and dynamic (motion) postures with effective control. It is also related to the joints and joint capsules surrounding the joint. Joint position sense in the neck is important for stability and, when this is impaired, pain can result as well as muscle atrophy and joint degenerative changes resulting in unpredictable “giving away.” Rehabilitation of neck muscles is increasingly addressing this condition.

The major reason for cervical spondylosis relates to degeneration from aging. It is additionally possible that injuries of spinal discs and/or genetics play a role in advanced degeneration earlier in life. Another problem is due to compressing of blood vessels and nerves due to the decreased disc space and the bone growth (osteophytes) which pinch these structures producing tingling/numbness, shocking-type feelings as well as pain and chronic muscle weakness. If this is not remedied, it can cause permanent damage and disability.

This is the process of degeneration resulting in bio-mechanical alterations contributing to compression of nerves as well as blood vessels and the resultant decrease in functioning.

The progressive nature of cervical spondylosis begins with the bio-mechanical alterations compromising nerves and vessels. The beginning change in the make-up of the disc results in drying out of the disc causing the center of the disc (nucleus pulposus) to lose elasticity, decrease in height, and weaked its weight-bearing properties.

The outer part of the disc that surrounds the nucleus (annulus) is weaker in the back than the front. This provides a pathway for the inner part of the disc to herniate through the annulus. As the disc drys out, the annulus becomes weaker and is not able to handle simple loading like forward bending and twisting. A decrease in disc height causes disc bulging and loosening of ligaments resulting in the front part of the spinal column to undergo compression.

These changes in mechanical stability results in abnormal forward curves in the cervical spine called kyphosis. If not corrected, it will continue to progress and the fibers of the annulus can become separated from the cartilage to which it attaches called endplates. This can also result in abnormal bone formation and bone spurs (osteophytes) which can form, not only on the outside parts of the bones, but on the inside where the spinal cord is housed, placing it in harms way. 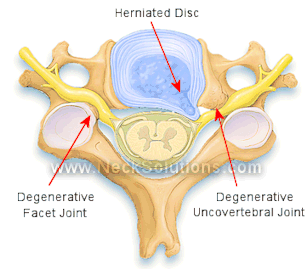 Bone as well as the and softer tissues can undergo regeneration, reforming structures where stress is causing the deformation in attempts to strengthen these structure to increase stability. If restructuring of bio-mechanical integrity is not possible through exercises or postural changes, the body will reform the tissues along abnormal loading and stress patterns. Therefore, bone spurs and osteophytes will form as a response to loading and bone forms in stressed regions, while being reabsorbed in non-stressed regions.

Neck Stabilization
Loosing the weight loading capacity from degeneration disrupts transferring of loads, therefore placing more stress on the back and sides of the spinal bones resulting in abnormal bone growth in the uncovertebral as well as the facet joints, accelerating the degenerative process which may extend into the foramen (where nerves and blood vessels go through) and cause an increase in the postural instability as the spine moves further forward. This causes an overall reduction in the space that the spinal cord has to run through, placing it in danger of myelopathy. 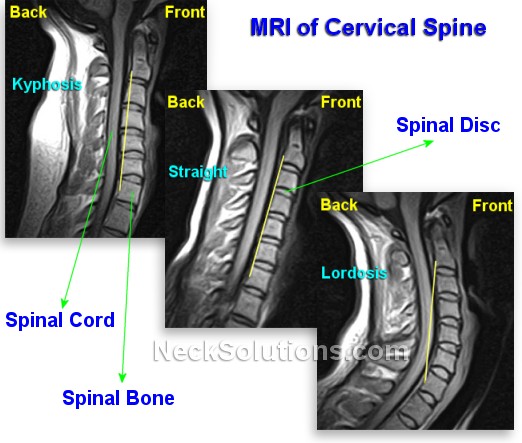 The abnormal forward curve of the neck (kyphotic deformity) along with the nerve and blood vessel constriction is frequently seen in myelopathy (cervical spondylotic myelopathy). From the beginning, losing disc height resulting from water loss and alteration of transmitting loads in the cervical spine leads to posture and mechanical alterations. During normal life activities, this continues as the discs continue losing height towards the front.

The change in postural stability results in altered mechanics and loading and the vertebral bodies, discs, and ligaments will fail to support loading along beneficial lines, transferring load and stress into surrounding structures. It is imperative to restore the normal postural relationship, thus re-establishing loading balance within the cervical spine, or the increased loading will cause additional progressing of poor posture and the consequences of degenerating along the lines of abnormal stress, forming a vicious cycle.

Posture changes resulting from degeneration can progress into cervical spondylosis. The normal cervical posture accepts forces of loading along proper biomechanical lines of stability. Early loss of disc height from drying out causes the normal curve to reduce and even reverse, while the loading forces are abnormally put into the cervical and this can make the cervical spine more susceptible to injury due to its weaken and compromised state.

Treatments may require surgery, especially chronic forms with myelopathy. It is important to keep the cervical spine in good shape with exercise, forms of traction and ergonomics including a good, supportive pillow that can help maintain and restore the normal posture. Treatment using biomaterials, stem cells and genetics are being researched. Treatment may also be addressed to any possible findings of painful degeneration with Modic findings on MRI, which have incorporated antibiotics in some cases of back pain.

In the studies above, a latex pillow was used, however, the most significant part is “ergonomic”. Since different pillow materials were not tested, no conclusion can be made regarding latex or non-latex. A significant difference is improved ergonomics compared to a usual pillow. This has been my personal and clinical experience; an ergonomic pillow, regardless of latex, foam, fiber, or combination, makes a big difference. The important factor is finding one that fits your anatomy best. This is why I recommend the therapeutic pillow for neck pain, because it is a functional pillow to maintain the least strain in back or side sleeping postures.

Damage to the spinal cord in spondylosis can result in wasting and weakness of the upper limbs. This is often seen with no lower limb or sensory disturbances. This is termed cervical spondylotic amyotrophy and effects either proximal muscles of the scapula, deltoid, and biceps, or distal muscles of the triceps, forearm, and hand.

Symptoms usually stabilize and do not progress as in cases of ALS or myasthenia gravis, where dropped head syndrome can often be an early sign. Amyotrophic lateral sclerosis can resemble cervical spondylotic amyotrophy and it is possible for patients to present with both, thus posing a diagnostic problem due to both diseases mainly affecting middle aged and elderly individuals.

Conservative therapy is more effective for arresting progression with proximal rather than distal cervical spondylotic amyotrophy. In patients with dropped head syndrome, daily activities as well as social interaction is problematic. Conservative management includes management of head posture with collars. This can help alleviate postural and social issues and improve quality of life, boosting morale and self esteem.