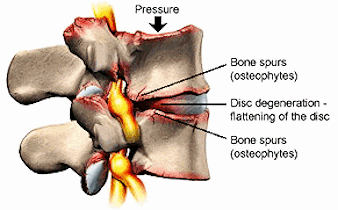 When Neck Pain Persists Longer Than 12 Weeks, There Most Likely Is Cervical Degenerative Disc Disease Involved. 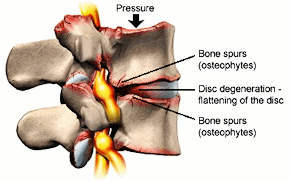 It is thought to result from a process of changes in the disc starting with dehydration and loss of resistive force of the disc. This results in loss of the disc height and increases the stress on the ends of the spinal bones that surround the disc. The abnormal stress causes the ends of the bones to become flattened and osteophytes or bone spurs form along with outgrowths of bone from the facet joints. The decrease in disc height may also result in loss of the normal curve of the neck.

The cause of the pain in cervical degenerative disc disease is thought to come from the disc which becomes incompetent as a result of the degenerative process. The discs are supplied by nerves and disc degeneration may stimulate these nerves and cause mechanical neck pain.

Degeneration of the cervical facet joints can also have a significant contribution to mechanical neck pain. The facet joints and discs are closely related as they form the basis of motion between the spinal bones. As these structures degenerate they become unstable at the affected area and serve to further the process of degeneration.

Some suggest that the loss of the normal forward curve resulting from cervical disc degeneration causes muscle spasm and mechanical or axial neck pain. Most likely, it is a combination of these factors; the disc, facet joints and alignment of the bones that are responsible for mechanical neck pain.

Typically, patients with cervical degenerative disc disease complain of mechanical neck pain that is made worse by bending the head forward as this places more stress on the discs.

The same changes associated with cervical disc degeneration are also associated with radiculopathy or commonly called a pinched nerve and myelopathy, and there may be abnormal neurological findings, thus progressing past the description of mechanical neck pain.

Headaches that radiate to the base of the skull are many times associated with degenerative disc disease from spasm of the muscles.

The next part focuses on C4 radiculopathy, which can mimic mechanical neck pain.