Common symptoms of whiplash injury are neck pain from mild muscle strain or minor tearing of muscles and/or ligaments. In more severe cases, this type of neck injury may include nerve damage, disc damage, and in the most severe cases ruptures of ligaments in the neck and fractures of the neck bones.

Minor whiplash injury is usually associated with pain and limited motion of the head and neck. These symptoms are usually temporary, but occasionally they may persist and include headaches, dizziness, and tingling in the arms indicating pain may be more than a minor neck strain or sprain.

When a car is struck from the rear it is accelerated forward which causes the seatback to push against the body and propel it forward while the head lags behind until the neck reaches its structural limit. The head is then suddenly accelerated by the neck like the tip of a whip which is where the term “whiplash” injury originates. Properly constructed and adjusted head rests (restraints) limit the damage to the neck before the head starts to follow the body.

The neck being thrown back and forth beyond its normal range of motion (distortion) results from sudden movement of the head relative to the body probably explains most whiplash injuries, but experimental and field studies suggest that nerve damage and associated long term whiplash injury symptoms can occur with even mild levels of neck distortion. It is possible that damage to the nerves and the joints is caused by motion of neck bones during a crash or that the nerve damage is caused by sudden changes in spinal fluid pressure from neck distortions. Neck sprains and strains are the most frequently reported injuries in insurance claims.

Risk of having a whiplash injury in a car accident?

Females are about 2 times more at risk of whiplash neck injury in all types of collisions and are more likely to develop long term symptoms. Fifty five percent of females with whiplash injuries develop long term symptoms compared with about 40 percent of males. Possible reasons are that males have stronger neck muscles than females for about the same size head and females tend to sit farther away from their seats than males which means the head must travel more before reaching the head restraint. This is seen generally as women suffer neck pain more than men 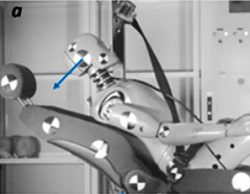 Drivers have a higher risk of whiplash injury than passengers possibly because they tend to move forward and away from the seat as they reach for the steering wheel and observe traffic, while passengers are more relaxed and lean further back in their seats, putting the head closer to the restraint. Persons in the rear seats are less likely to sustain neck injuries. This is assuming sitting correctly.

How can the headrest influence whiplash injury? 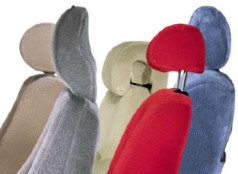 The head restraint is commonly called a head rest, indicating it is for comfort rather than a safety feature, but, installation of these are similar to seat belts – for protection. A proper head restraint reduces forceful backward trajectory of the head in a rear-end collision, reducing the odds of suffering a whiplash injury to the neck. The necessity of a good head rest is just as important as other safety devices in a vehicle, perhaps more so, as rear-end collisions are very common.

Having a poorly adjusted head restraint or one that cannot be adjusted properly to the height of your head in your vehicle is a major risk factor for increasing the severity of whiplash neck injury during a rear end collision. View the Insurance Institute for Highway Safety Head Restraint Rating to get an idea of how your car’s head restraint rates.

How To Adjust Your Head Rest To Protect From Whiplash Injury 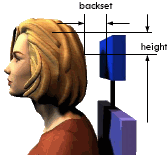 For every inch your head moves forward in relation to the restraint (away from the headrest), the force of injury to your neck is magnified. A crash test by the Center for Research into Automotive Safety and Health indicates the forward positioning of the head by two inches greatly increases the whiplash force to your neck.

The term “backset” refers to the distance between the head and the restraint. This backset should not be more than 4 finger widths.

If your head restraint fails to meet the minimum required backset, it can not help to prevent whiplash injury. The geometry of head restraints are evaluated by institute researchers at regular intervals in vehicles using the height and backset compared with an average sized person. A head restraint needs to be, at the minimum, at the height of the center of gravity of the head, which is approximately 3 and a half inches or 9 centimeters below the top of the head. The backset, which is the distance in back of the head, needs to be as short as possible. A backset greater than 4 inches or 10 centimeters is associated with more symptoms of whiplash injury to the neck in rear-end collisions. For more see the National Highway Traffic Safety Administration Review

The National Highway Traffic Safety Administration (NHTSA) told auto makers the head restraints in their passenger vehicles will have to extend higher and fit closer to the backs of people’s heads. For the first time, the new standard addresses the backset. Head restraints will have to be within about 2 inches behind the head. It has been in effect since 2009. However, this has created a new problem – headrests that are very uncomfortable and leave a space between the head, neck and headrest. Fortunately, there are some products which can help this now like the car neck pillow.

What Else Can Be Done To Reduce Whiplash?

While at a stop, having your head or body turned during a collision can increase your chances of a significant injury. Keep your eyes on the road and your head straight. If you know you’re going to get hit, then reduce the distance between your head and the head restraint (backset) by moving your head back. The car neck pillow reduces the backset distance and increases your level of safety.

Crashes involving a whiplash injury happen at lightning-fast speeds, but if you have time to prepare: Put your head and your neck all the way back so that you’re in contact with the seat back and the properly adjusted head restraint. Straight-arm the steering wheel and get a good grip. If you are stopped, put your foot on the brake as hard as you can. Look straight ahead, not in the rear-view mirror – don’t have your head turned at all. Put your neck back slightly so your eyes are looking level up at about the top of the windshield. Scrunch your shoulders up toward your ears and then brace.

Benefits Of Reducing Effects Of Whiplash

Studies show 11 to 13% of adults suffer from (CWP) chronic widespread pain, which is pain on the right and left sides of the body, below and above the waist, including the spinal region. They experience significant disability along with reduced quality of life.

More about whiplash injury as it relates to specific neck problems in the article; whiplash and neck pain, helping yourself in whiplash recovery and managing whiplash.