The temporomandibular joint (TMJ) is the most regularly used joint in the human body. The TMJ, connects the upper and lower jawbones which allows the jaw to open, move back and forth and sideways. It opens and closes about 1500 to 2000 times a day and is also instrumental in several functional movements such as chewing, swallowing, breathing, talking, or yawning. Because the TMJ is a very regularly used joint, its bone, muscle or cartilage may deteriorate over time, leading to TMJ pain or temporomandibular disorders (TMD). 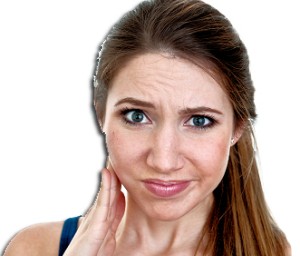 If you cover your ears with your palms, your thumbs will be on the base of your skull called the occiput. Your palms and fingers will lie across your temporal bones, and the heels of your hands will rest on the angle of your jaw called the mandible. The temporal bone and mandible interact at the temporomandibular joint called the tmj for short. You can locate this joint by lightly placing two fingers directly in front of your ears and open and close your mouth.

Temporomandibular joint disorders are common in adults; as many as one third of adults report having one or more symptoms, which include jaw or neck pain, headaches, and clicking, popping or grating noises within the joint. The joint has a capsule that contains an articular disc and surrounding muscles have a nerve supply which is thought to be the primary source of pain in TMJ disorders.

The cause of pain, in most cases, is not clear. Some are thought to be joint capsule inflammation or damage and muscle pain or spasm may be caused by abnormal occlusion, teeth grinding (bruxism), teeth clenching, lip biting, stress, anxiety, or abnormalities of the disc in the joint.

Temporomandibular disorder (TMD) is a term that refers to 1 or more conditions that adversely affect the temporomandibular joint or the surrounding masticatory (chewing) musculature. In general, TMD symptoms consist of pain at rest and/or during jaw function, limited range or disturbances of mandibular motion, and noises from within the temporomandibular joint (TMJ). The most common and general categorization of TMD is to separate it into muscle disorders (myofascial disorders that affect the masticatory musculature) or TMJ articular disorders (those that directly affect the TMJ itself like arthritis). It should be noted that both muscle and joint problems can exist at the same time. 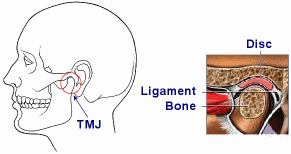 The TMJ Joint has a disc between the condyle portion of the jaw and where it articulates with the skull which can be displaced and result in clicking or locking.

Condylar erosion is considered an inflammatory subset of osteoarthritis and is considered a sign of progressive arthritic changes potentially contributing to changes in dentofacial morphology or limited mandibular growth.

Furthermore, some studies have investigated the relationship between neck symptoms noting that mouth opening is always accompanied by head and neck extension and mouth closing by head and neck flexion. These studies suggest that functional jaw movements use mandibular, head, and neck movements involving the temporomandibular joint, the atlanto-occipital joints between the head and neck, and the lower joints of the neck. The studies have noted the contribution of the upper part of the neck, particularly the atlanto-occipital joint, for proper positioning of the TMJ.

Patients with TMD who hold their heads farther forward relative to the shoulders (forward head posture) have a high probability of experiencing symptom improvement as a result of posture training and being provided with self-management instructions.

Poor head & neck posture is widespread in the general population and appears to be an adaptive, self-perpetuating trait that most people lack the cognitive ability or desire to correct by themselves. Many practitioners have speculated that poor posture may have a negative effect on temporomandibular, or TMD, symptoms and treatment outcome.

Forward head posture is the most common form of poor posture and is assumed by many authors to be related to a multitude of myofascial pain disorders. With this posture, the head’s center of gravity is forward of the spine’s weight-bearing axis, which increases the strain within the posterior cervical muscles, ligaments and joints. Studies have demonstrated that when the head is positioned forward, the upper trapezius muscle activity is significantly higher than it is when the head is in normal alignment and indicates that the patient is more likely have pain from overusing the muscles.

It has been demonstrated that neck muscle activity influences masticatory muscle activity. The additional demand that is placed on the neck by the forward head posture alters the masticatory system so that people are more susceptible to tmj muscle strain, spasm and pain. Posture training usually involves posture exercises performed repetitively to stretch structures that poor posture tends to shorten, strengthen structures that poor posture tends to weaken and create an awareness of the desirable posture.

Also, relating to the neck, whiplash injury has also been associated with tmj pain. The mechanism is not clear, however, the 2000 text Dynamic Behavior of the Temporomandibular Joint in 198 Frontiers in Whiplash Trauma, indicates that it is mostly related to the neck. It is stated, “Positioning of a headrest very close to the head would provide a clear means of preventing mouth opening.” The authors indicate that mouth opening is observed during whiplash, but it does not exceed the physiological limits. The authors state “…TMJ dysfunction is more likely due to post-crash neuromuscular changes and/or pain referral of a cervicogenic [neck] nature.”

I can personally relate to this as I have been only able to chew on one side for some time due to dental issues that I have been putting off. I have experienced increased neck pain on the opposite side. So, putting off dental work that causes chewing on one side, or tmj treatment with pain one side that leads to chewing on the pain free side, can be directly related to neck pain.

There is also an association to suggest that anxiety, stress, and other emotional disturbances may worsen TMJ disorders, especially in patients who experience chronic pain.

Grinding of teeth (bruxism), degenerative changes in the joint (ankylosis), joint pain as well as itching of the ear are signs related to TMJ. The study further noted, that movements of the jaw or neck increases pressure on the hair cells in the inner ear which can cause ringing in the ears or tinnitus and vertigo or dizziness; unusual symptoms not often thought to be related to neck pain.

Muscular origins show 2 main muscles that can can form areas of strain with referred pain. The “x” shows the area of strain and the red indicates the areas of pain referral. Click on the pictures to make larger.

Determining the level of jaw restriction with TMJ.

The Three-knuckle Test. The fully opened jaw should admit the first three knuckles of the non-dominate hand in individuals with normal joint and bone structures and without areas of muscles strain. With areas of strain in the masseter muscle, usually only 2 knuckles can be admitted. If there are areas of strain in the temporalis muscle, usually only 2 and a half knuckles can be admitted. Grating or popping sounds during this test may indicate TMJ joint problems and require expert examination.

Sometimes, the symptoms of trigeminal neuralgia can mimic tmj pain. From the picture, you can see the nerve and why symptoms can be similar. Both conditions can cause pain from the muscles of the face and jaw. With trigeminal neuralgia, the pain is usually on one side and is usually described as stabbing, with relief at night. The pain is of short duration and can be minutes or just seconds and there are long periods between symptoms.

Symptoms of trigeminal neuralgia can include face muscle twitching, redness of the skin and tearing. It is possible that both conditions, trigeminal neuralgia and tmj problems can exist at the same time. Typically, tmj disorders can be on both sides, pain being dull and more constant, problematic at night, short periods between symptoms and no twitching, redness of the skin or tearing.

Although there is no clear methods of treatment for tmj pain, we next explore methods for TMJ Pain Relief.