Quercetin is a flavonoid naturally found in fruits and vegetables like red wine, onions, green tea, apples, berries etc. It known for its Anti-oxidant and Anti-Inflammatory Properties.

Studies indicate many health benefits and it is a great joint health supplement for arthritis.

Quercetin is a natural, safe dietary supplement and also found in vegetables, fruits and nuts, and has anti-inflammatory and antioxidant properties.

Decreasing inflammation and reducing oxidative stress can have beneficial affects for many conditions. It may reduce infection as it is known to exert a modulating action on immunity. A 2019 study in Molecular Nutrition & Food Research shows quercetin helps reduce chronic inflammation.

Oxidative stress results from an imbalance of the body’s defense mechanisms and results in excessive generation of free radicals, which are involved in various conditions such as neurodegenerative diseases, diabetes, hypertension, liver damage, heart damage, atherosclerosis, and cancer. This supplement reduces effects of free radicals by transferring a hydrogen atom, thus stabilizing the radicals.

A 2019 study in the Journal of Cellular Physiology showed it eliminated cartilage degeneration and decreased cartilage cell death in the knee joints. 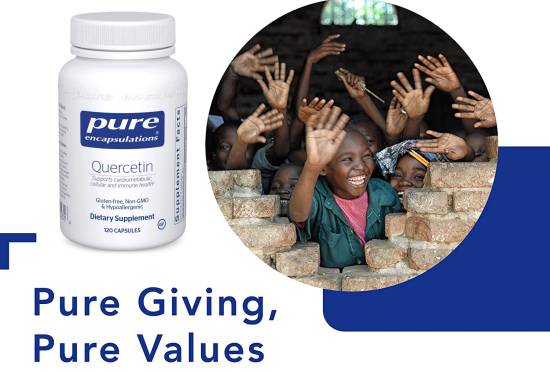 There is a growing evidence supporting the beneficial effects of Quercetin, which has led to its clinical use, as indicated by it’s use in over 90 clinical trials on ClinicalTrials.gov as antioxidant therapy in mucositis, hepatitis C, idiopathic pulmonary fibrosis, osteoporosis, uric acid metabolism, cytokine release, and chronic obstructive pulmonary disease. In the latter study, supplementation was safely tolerated by patients with mild-to-severe chronic obstructive pulmonary disease, opening the way towards the potential use as a therapeutic agent for this condition.

Disc degeneration is a chronic spinal disorder and oxidative stress is a major contributing factor resulting in death of cells. This is a naturally occurring flavonoid, which has antioxidant as well as anti-inflammatory properties, has been studied in research on degenerative diseases.

Since approximately 80% of older people suffer from lower back pain, the aging population is contributing to an increased socio-economic burden on healthcare systems. Stimulation by factors such as oxidative stress, inflammation, and mechanical loading leads to increased death of cells and a cellular imbalance that eventually triggers and accelerates degenerative progression. It is a leading cause of low back pain and disability when present in the lumbar spine as well as the cervical spine and is a significant health issue, especially as we age.

A 2021 study in Biomed Research International confirmed that a protective effect against disc degeneration. The authors indicate it is a potential therapeutic strategy in the treatment of degenerative disc disease.

The current pharmacological treatment strategies for disc disease aims to alleviate the symptoms, however, they do not control or reverse the progression and cause some side effects. At an advanced stage, surgery is often required when conservative treatment methods fail, and this presents various risks. Therefore, the development of an effective drug that would prevent or alleviate the progression of disc disease is crucial and quercetin shows much promise.

A 2017 study in the Journal of the American College of Nutrition showed five hundred milligrams of quercetin supplementation per day for 8 weeks resulted in significant improvements in clinical symptoms, disease activity, inflammatory markers, and health assessment in women with rheumatoid arthritis.

A 2017 study in Biomedicine & Pharmacotherapy showed the use of quercetin as a single therapeutic agent, which is non-toxic, resulted in the lowest degree of joint inflammation and the highest protection when compared to and with methotrexate. Methotrexate is used to treat rheumatoid arthritis and psoriasis, with significant risk of very serious interactions. The authors indicate quercetin may be an alternative treatment because it modulates the main pathogenic pathways of the disease.

While not a household name – yet, the multitude of health benefits makes this a great addition to your joint health regimen.