CoQ10 is a one of the most beneficial supplements with amazing health benefits. This combines it with the recommended PQQ for bettter effect and is the ubiquinol form for better tissue distribution and absorption.

Manufactured in the USA at an FDA-registered and NSF-cGMP certified facility. 30 day money-back guarantee!

CoQ10 has been known for it’s many benefits, mainly cardiovascular. The effects of inflammation are widespread and those with severe degenerative disc disease, a type of osteoarthritis, have been linked to higher mortality and calcification of the abdominal aorta.[1]

Coenzyme Q10 has been shown to alleviate pain and reduce cartilage destruction in arthritis by regulating nitric oxide and inflammatory chemicals. The authors of this study indicate, “Considering the bioenergetic, antioxidant and anti-inflammatory property of CoQ10, this may be a promising therapeutic option for OA [Osteoarthritis], a consequence of inflammation and dysregulated metabolism.”[2] 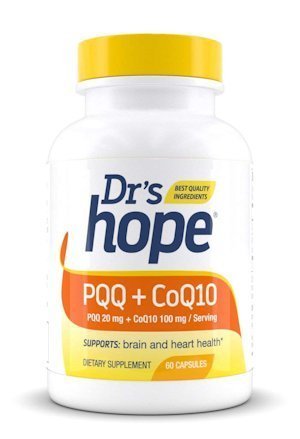 Coenzyme Q10 has proven benefits over the years and a recent clinical trial, oral CoQ10 supplements reduced the mortality of patients with cardiovascular disease by approximately 50%. The study in Switzerland indicates less hospital time, significantly improved cardiovascular function, and a better quality of life.[3]

Muscle function may be enhanced. A side effect of taking statins is statin induced myopathy or muscle disorders. A study used Atorvastatin which caused skeletal muscle size and shape variation, necrosis or muscle cell death, disorganization, and other disorders. It was found that these changes were improved by giving coenzyme Q10.[4]

The best source of Coenzyme Q10 is organ meat. It is a super nutrient is crucial in preventing mitochondrial depletion. Mitochondria are microscopic energy sources in your cells and convert energy from food into the energy your cells need.Because mitochondria holds CoQ10, the more mitochondria you can eat, the more CoQ10 you can make.

The more energy these cell powerhouses put out, the more waste they produce and mitochondria are subject to oxidation and free radical damage resulting in inflammation. The damage effects the DNA, causing mitochondria to misfire. This can result in depletion as some die off and some become weaker. This is the source of the aging process. CoQ10 has antioxidant properties that protect mitochondria from free radical damage, which stops them from aging and dying. It is high octane fuel that mitochondria need to produce the energy.[5]

Coenzyme Q10 deficiencies are seen with genetic mutations, mitochondrial diseases, age related oxidative stress, carcinogenesis, and as a secondary effect of statin use. Low levels are associated with different neurodegenerative disorders, fibromyalgia, diabetes, cancer, muscular and cardiovascular diseases. New formulations like ubiquinol have been developed to increase tissue distribution absorption. CoQ10 is a great mitochondrial energizer and antioxidant strategy in many diseases and may provide significant symptomatic benefit.[6]

How Much Coenzyme Q10 Should I take?

Considering the widespread effects of degenerative diseases, I am a big proponent of CoQ10, especially for those with arthritis and cardiovascular disease, diabetes, liver and or kidney disease. I recommend that 30mg/day, preferably the ubiquinol form – the most potent. If you are 60 and over double it to 60mg, and if you suffer from a chronic condition, increase it to at least 100mg.

There are many varieties of formulas; some with many and others with one or just a few. Ubiquinol should be the form and I have seen studies with zinc, selenium, and even pro-biotics. This can be confusing. I like taking it with PQQ (pyrroloquinoline quinone). I personally use Dr’s Hope PQQ (Pyrroloquinoline Quinone) 20 mg + CoQ10 (Ubiquinol) 100mg.

CoQ10 works with what you have, but what about the mitochondria already lost? That’s where the nutrient PQQ comes in. It triggers the cells to build new, healthy mitochondria to produce more fuel (Mitochondrial Biogenesis)[7], so your cell systems work more energetically and more efficiently. While it is in foods like bananas, kiwi fruit, cabbage, carrots and sweet potatoes, I recommend taking 10mg of PQQ/day with CoQ10.