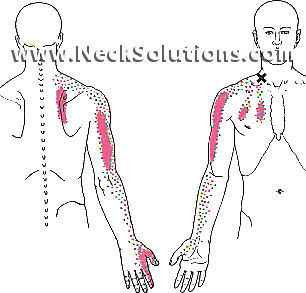 Breathing exercises involving deep breathing are easily performed while standing, sitting or lying flat on a comfortable surface. Lack of correct breathing mechanics can lead to neck pain by placing abnormal loading on front neck muscles. These muscles are the “Scalene” muscles and even though these muscles become problematic, the pain can radiate or travel into the shoulders, arms and, as illustrated below, into the hands into the hands.

As the exercises detail, proper breathing technique features an expansion of the stomach area, which can be seen as the stomach area rises. This is diaphragmatic breathing bringing air to the bottom portion of the chest which increases oxygenation, lowering blood pressure and relaxing muscles. Observing a newborn or small children, this is proper breathing. This type of breathing permits the highest volume of air intake, which can ultimately reduce stress and increase relaxation throughout the body.

Practicing over the years, these poor breathing techniques are seen frequently – in almost every patient! Not only from my experience in anatomy and physiology, but also from years of Martial Arts study, I made it essential to instruct these breathing exercises which, in addition to reducing neck muscle strain, can increase oxygen throughout your body, reducing whole body stress. The results can be dramatic. This method of deep breathing was natural at first, but as we age and stress accumulates we abandon this correct form of breathing and practicing the breathing exercises is a great way to return to this beneficial method of increasing oxygen, energy and decreasing neck pain.

You may feel somewhat awkward to begin with as coordination must be re-established, using all the involved and correct muscles for breathing, however, practicing breathing exercises will ingrain this into “muscle memory”, thus becoming second nature. The benefit of the breathing exercises will be apparent during periods of anxiety and stressful situation, when you feel your neck muscles tighten and heart rate increase. Begin to use the technique learned with the breathing exercises and you will notice a reduction of these mental and physical difficulties.

Getting started: Lie down facing up making sure your neck is properly supported with a pillow or neck roll which places the neck in a posture that helps to open the airways.

The first illustration here indicates the incorrect method to notice. The middle shows proper exhalation, while and the right illustration indicated proper inhalation.

Breathe through your mouth with one hand placed on the abdomen and the other on your chest and notice the movement. Typically when taking a deep breath, the improper method is observed where either the chest only is used or the abdomen pushes in while the chest pushes out.

To learn abdominal breathing, place the hands as described and exhale fully. Keep your chest in and relaxed. Start by contracting the abdominal muscles and the diaphragm. Then, without expanding the upper chest, inhale and allow your abdomen to expand out. Go for a smooth even rhythm. Once you are good at abdominal breathing you can begin to coordinate the movement of the abdomen with the chest. A good method is to take air in for the count of 4, then pause for a count of 4, then exhale for a count of 4. Try to remain aware of your breathing throughout the day. Placing the tip of your tongue on the roof of your mouth right behind the front teeth and breathing around your tongue will aid in relaxation and moisten your mouth.

Another useful exercise is to imagine the air coming in going down in front to your abdomen then on exhale imagine the air going back and up the spine to the head and out. At the point when you pause or hold the breath, focus on the area your having trouble with such as the neck, shoulders, head etc…

You can provide needed relief for already overworked muscles in the neck by avoiding lifting unbalanced things requiring
using your arms to be held far away from your body, or having to exert sudden force. If you have to strain during everyday tasks, remember to think about the breathing exercises and reducing the tension of the neck muscles as you lift or shrug your shoulders and let the head be placed in a forward posture. As you learn the new breathing exercises, you can also find use of a exerciser specifically designed for the neck to assist normalization and proper balance of the neck muscles. When straining during any activity try to keep breathing. When turning in bed roll the head instead of lifting it off the pillow. Always observe correct neck posture and use a good neck pillow to promote an open airway and correct alignment of neck curve.

Just as improper breathing techniques may cause neck problems, which the exercises help to correct, neck pain itself may cause breathing problems. In chronic neck pain, loss of contraction ability of the deeper neck muscles along with increased activity and overworking of the outer neck muscles, limited motion ranges and disturbance of control related to the nerves and muscles, including mental stress provides a link between neck pain and breathing problems.

Due to related altered cervical spine biomechanics, changes in muscle function and reduced motion, the associated mechanical changes in respiratory muscles can reduce their ability to generate appropriate forces; which may lead to deterioration of pulmonary function and, over time, may cause permanent respiratory weakness or pathology. The evidence would suggest the breathing exercises are an interventional approach in those with chronic neck pain that may produce long term benefits.

A 2014 study in the journal of Manual Therapy again focused on dysfunctional breathing and chronic neck pain. In this study, the authors suggested that patients with chronic neck pain need to strengthen neck muscles and may benefit from breathing exercises.

A 2014 study in Respiratory Care found a significant correlation between breathing function and chronic neck pain for intensity of pain, neck muscle strength and kinesiophobia (fear of motion). Therefore; respiratory dysfunction is associated with cervical spine muscle dysfunction, pain and reluctance to perform proper motion due to fear of increasing pain (movement avoidance).

A 2018 study in Biomed Research International found that those with forward head posture and induced torticollis position displayed a reduced respiratory function. This indicates that even in the absence of pain, altered head and neck postures have an immediate negative effect on respiratory function.

A 2018 study in the Journal of Physical Therapy Science found that forward head posture increased the sternocleidomastoid and the scalene muscles activity, while decreasing forced vital capacity of the lungs. The authors of the study stressed the necessity to produce better therapeutic interventions for treating forward head posture based on pulmonary function and related synergist muscles. Breathing exercises would certainly fit this criteria.

A 2017 study in the Journal of Back and Musculoskeleletal Rehabilitation found a correlation between respiratory function, forward head posture, and accessory respiratory muscles. The authors noted significant correlations between altered posture and lower respiratory functions, indicating postural interventions to improve functional pulmonary reductions.

A 2016 study in the Journal of Physical Therapy Science that forced breathing exercises as therapy is effective at improving trunk stabilization and daily living activities of patients suffering chronic low back pain.

A 2013 edition of the Journal of Physical Therapy Science, studied deep breathing training and found it had a positive effect on improving breathing as well as enhancing low back stabilization. They used a method of deep breathing exercises consisting of holding in the breath for 10 seconds at the end of inhaling. They did 5 sets of 10 repetitions of deep breathing using this technique to achieve the results. They were given a one minute break after each set, and did the training one time per day, 3 times per week, for 4 weeks. The authors indicated the diaphragm is an important part of core stability during breathing in, reducing low back spinal stress through a combination of muscular actions, along with intra-abdominal pressure.

Low back instability is a cause of back pain. Stability of the back is important to prevent and treat low back injuries. This method of deep breathing may be used to reduce back pain and improve respiration as well as trunk stability when performing back stabilization exercises.

A 2014 study in the Journal of Back & Musculoskeletal Rehabilitation, the authors studied the effect of expiration on back a stabilization exercise, noting that exhaling maximally, holding the breath after maximum expiration, produced significant increases in core muscle function.

A 2013 study in Respiratory Physiology and Neurobiology found individuals with low back painwere more likely to have diaphragm fatigue, finding an association between breathing and spinal control.

A 2017 review study in the Journal of Sports Rehabilitation indicates that alterations in core activation muscle patterns, lung function, breathing patterns, and diaphragm mechanics may occur in back pain. They postulated that breathing training may be effective in reducing pain, improving respiratory function, and quality of life. They found these exercises were effective in improving lung function, reducing back pain, and improving quality of life. They recommend treatment for chronic, nonspecific low back pain should include breathing exercise when indicated.

A 2015 study in Medicine and Science in Sports and Exercise indicate that inspiration muscle training affects proprioceptive postural control in individuals with low back pain, improving both inspiratory muscle strength and back pain severity. The authors indicate these type of breathing exercises may be useful in rehabilitation for patients.

A 2004 article published in the Journal of Osteopathic Medicine indicates that BPD [breathing pattern disorders] may be a “major factor in encouraging and maintaining musculoskeletal dysfunction in general, and back pain in particular”.

A 2018 study in the journal Gait & Posture found a direct relationship between increased muscle tone due to stress and postural stability, noting that daily stress can lead to joint overload and increase the risk of falls.

The authors indicate that breathing can have a direct effect on pain and stress management and were troubled by the fact that most of the population may not be able to breathe properly.