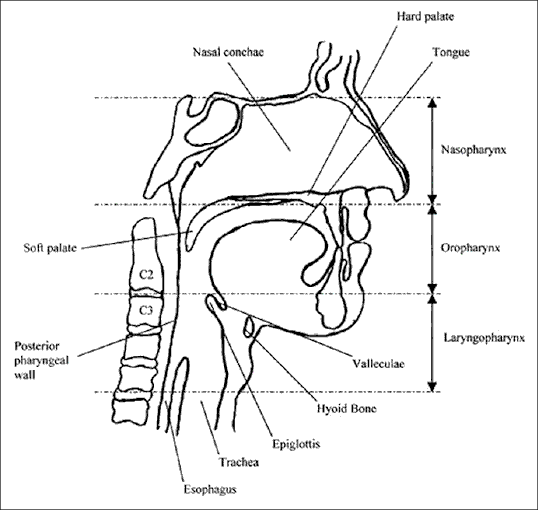 Sleep apnea has many causes and there can be many factors involved. Because the neck and cervical spine is very close to the upper airway, symptoms can be produced by neck problems in certain individuals.

The condition has a significant impact, not only on sleep, but in quality of life, daily activities, and contributes to higher health care costs. A comparative Study in the journal Sleep indicates and in the general adult population, 80% to 90% of those with this condition are untreated and undiagnosed.

It is a chronic condition with partial collapse or anatomical obstruction of the upper airway during sleep. Due to inadequate quality and/or quantity of sleep, sufferers often exhibit related problems during the day, like excessive daytime sleepiness and poor cognitive function. Some of the more serious consequences can be secondary cardiovascular disorders.

Structures of the neck have been demonstrated to affect patency of the upper airway. Fusions, osteophytes from degenerative arthritis and rheumatoid arthritis, along with more rare pathologies like osteochondromas are suspect. Poor alignment between the bottom of the skull and the first cervical vertebra called the Atlas may predispose patients to apnea, both prior to and after fusion surgery.

As a Chiropractor, the relationship between the skull and the first cervical vertebra has been an area of focus since the founding of the profession. The specific area relates to the brain stem which regulates life sustaining functions like breathing, heart rate and swallowing. This area helps transfer messages to and from the brain and spinal cord.

There are specialties of Chiropractors that focus on the upper cervical region. One is NUCCA (National Upper Cervical Chiropractic Association) and another is a method I used called Grostic Technique. Both use low force safe technique and in depth analysis.

In the above study, the authors concluded, “In addition, occipital–cervical alignment may be a factor. It is important for the clinician to be aware of the role of the cervical spine in producing symptoms of OSA [obstructive apnea] in certain patients. Further research is needed to elucidate the association between cervical spine anomalies and sleep apnea.”

The authors recommend positional therapy by avoiding back sleeping as a valuable therapy for mild to moderate obstructive apnea, indicating they represent between 65 and 87% of obstructive apnea patients, and this would be a “… cheap and effective solution for them.” For those with neck problems, there are special side sleeping pillows and “anti-snore pillows” that can help.

This is why, although results will vary, special pillows are very popular positional therapy devices.

Is Your Neck An Indicator Of Obstructive Sleep Apnea?

The results indicated a positive test called Easy Sleep Apnea Predictor (ESAP) (inability to span the neck) was 100% predictive of the condition in a general sleep clinic population.