Snug Seat adapters to use the Savant Headrest, Hardware, and the Axion with Snug Seat/R82 equipment.

The Snug Seat wheelchair is a popular design starting in 1987 and is now called the R82. We now have two snug seat adapters that allow the use of the Savant Headrest, Hardware, and the Axion with R82 equipment.

The SSR82 allows the use of Snug Seat/R82 Hardware to Savant Headrest. Will allow a headrest like the Savant (or an Axion) that normally accepts a one inch ball to be attached to Snug Seat hardware.

Please refer to the snug seat adapters diagram below for details: 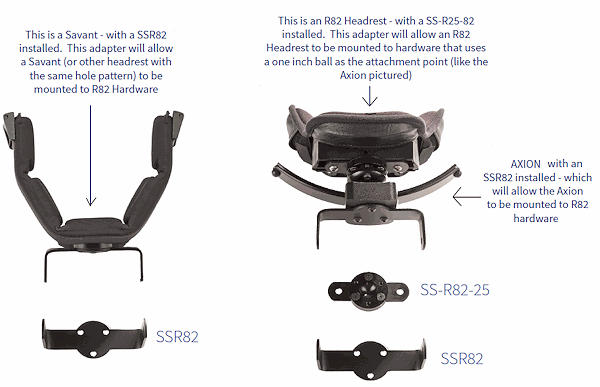 The Snug Seat wheelchair was developed in Scotland for postural assistance when sitting and was embraced by the U.S. medical community. Combining with R82, a Danish company with similar commitments, the products are distributed world-wide, with a reputation for manufacturing excellence, design, and function. In 1998 R82 acquired controlling interest in Snug Seat and complete ownership in 2011. R82 was acquired by Swedish company Etac AB in late 2011, and Snug Seat took over North American distribution of most Etac products for the US in 2013.

We are pleased to offer these snug seat adapters that allow the use of our unique products. So, Snug Seat has been re-named “R82” (this was the name of the European division previously – as of 2015, all Snug Seat and R82 are “R82”.) So there may be legacy part numbers and older product models that are still called Snug Seat – but it’s all R82 now. So, these are really R82 Adapters as well.