The medical term for tailbone pain is coccydynia, referring to the tailbone or coccyx (pronounced coc-six) and refers to pain symptoms in the area of the tailbone. Even though this problem could affect individuals ages as well as gender, the typical age is forty years and the occurrence is 5 times higher with women compared to men.

The term is actually taken from the Greek term for cuckoo because of it’s similarity to the beak of this bird. The coccyx is the last part of the spinal column and is a small bone that is just below the sacrum bone. It is made up of 3 – 5 small bones that, except for the first one, are usually fused together. The front part is slightly concave and the back part is slightly convex. The 5th nerve can exit through the tailbone, that also functions to attach the gluteus maximus and coccygeal muscles, as well as the anococcygeal ligament. 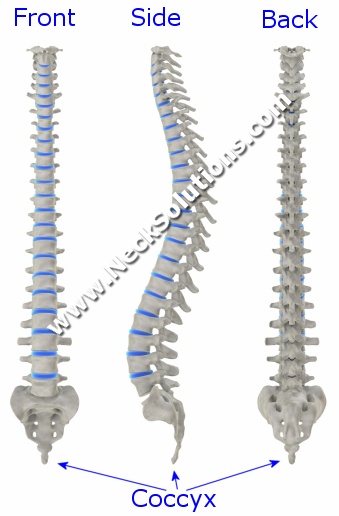 Activities that put prolonged pressure on the tailbone, such as horseback riding and sitting on hard surface for long periods of time may cause the onset of pain. Tailbone pain due to these causes usually is not permanent, but if the inflammation and symptoms are not managed, the pain may become chronic. People with coccydynia most often complain of pain in and around the coccyx without significant low back pain, pain radiation or referral of pain to other areas. However, low back pain is known to be higher in individuals with tailbone pain compared to the general population, particularly those with a coccyx that is curved forward with the end pointed straightforward.

Classically, this pain is associated with sitting and is worse when getting up from a seated position and can be relieved with standing or walking. Pain may be worse with constipation and feels better after a bowel movement. Pain may also be present with intercourse. Others may report relief of their pain when they sit on their legs or on one buttock. A fall on the tailbone which can inflame the ligaments or injure the coccyx or the attachment to the sacrum is probably the most common cause.

Most instances of coccyx pain arise with a subluxated (not dislocated) or hypermobile (excessive motion) coccyx, which results in lack of stability that could produce persistent swelling. Most claim a medical history of injury or trauma, which is associated with tailbone or coccyx instability, especially a subluxation such as happens with a fall on the buttocks or even prolonged labor and giving birth, in which the child’s head goes over the coccyx, where the force can sometimes damage the coccyx components ( disc, ligaments as well as bones). While not common, the force may result in a fracture of the coccyx.

Problems may be seen in x-rays with normal abnormal coccyx. Rarely, pain can happen from bursitis, arthritis, infection or a tumor. The pain may also result from spasm or other problems with the pelvic floor muscles.

During an examination by a doctor, area over the tailbone is checked for a pilonidal cyst, which is a sometimes painful ingrowth of hair follicle(s). This area can have local swelling and tenderness. Additionally, a mass may a tumor or bone. For most instances of coccyx pain, direct manipulation rectally of the coccyx produces pain.

Coccydynia is a clinical diagnosis for pain of the tailbone pain and imaging studies are valuable in evaluation and assessment. Radiographs may be taken to look for fracture or obvious displacement or subluxation. Radiographs in sitting as well as standing positions can be more beneficial than regular radiographs since they permit measurements of pelvic rotation and angle of the coccyx. Comparing standing with sitting x-rays can reveal abnormal findings for up to 70 percent of sufferers. Five to twenty five degrees of rotation is normal, so hypermobility is greater than twenty five degrees.

Magnetic resonance imaging (MRI) can show inflammation and CT or bone scanning may rule out pathologies like chordomas. Obtaining pain relief using injections of local anesthetics can aid in the diagnosis.

Non-surgical methods include medicines like non-steroidal anti-inflammatory drugs (NSAIDs) such as Ibuprofen pain killers, minimal sitting, stool softeners, a tailbone cushion, as well as additional postural changes intended for unloading, ice at first and then moist heat following a few days, ultrasound therapies and also manual treatment such as massage, stretches, and also joint mobilization. Coccygeal adjustment may shift the coccyx back to it’s correct placement and relieve pain. People who have normal coccyx movement respond better to these types of therapies. Using loose fitted clothing that won’t place pressure on the area around the tailbone is advised.

Additionally, it may help by wearing flat, comfortable footwear. Many individuals having pain find it more comfortable to sleep on their side . You can even try to sleep using a body pillow or cushion in between the knees. It may take weeks or even months of conventional therapy before substantial pain relief is experienced. Depression as well as anxiety, if existing – particularly if the pain has been a problem for a long time – really should be treated. A mix of therapies in order to diminish pain as well as activity changes in order to keep pressure away is generally adequate in order to manage or relieve the pain.

Surgery is only considered in rare instances, and only in very severe cases, however, it may be appropriate in certain patients who suffer tailbone pain that is disabling and have not responded to non-operative therapies. Generally, surgery consists of removal of a hypermobile segment or complete removal (coccygectomy). These options may be used in those individuals with advanced degeneration with coccyx instability (e.g., subluxation or hypermobility) and are successful between 60 – 91 percent. Best results are with hypermobile or subluxation patients and not those with normal movement.

A common complication of removing the coccyx is infection, which occurs in about 22 percent of surgeries due to the nature of the area with hygiene, locating for proper wound treatment and pressure from sitting.

A 2014 medical article in the Ochsner Journal indicates risk factors for developing coccyx pain include female gender and obesity. The authors note a 90% success rate for conservative treatment.

A 2017 study in the journal PM & R indicates that pelvic floor physical therapy is a safe and effective method of treating coccxy pain.

A 2017 study in the Journal of Bodywork and Movement Therapies showed that stretching of the piriformis and iliopsoas muscles showed significant improvement in pain relief and pain free sitting.

I have had experience in treating tailbone pain with conservative methods. This would include manipulation using various non-invasive techniques like pelvo-sacral adjustments, mild coccyx techniques, support cushions, heat and electrical/ultrasound therapy, and myofascial techniques. However, for persistent and/or non-responsive cases, A 2018 study in the European Spine Journal showed that steroid injections combined with transrectal manipulation is a safe and easy option before considering surgical treatment.

A 2017 study report in the journal Pain Medicine indicated that radiofrequency ablation of the sacrococcygeal nerves may be as a useful treatment option in patients who have failed more conservative measures.