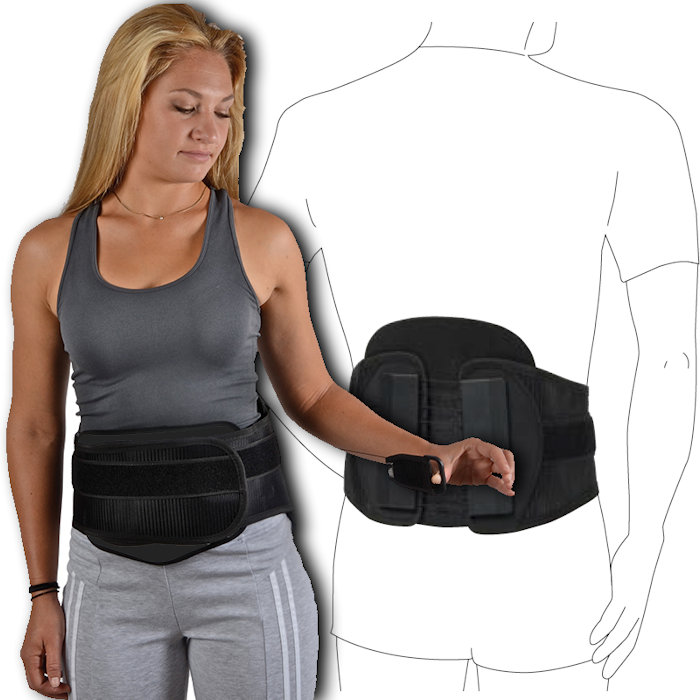 Billions of dollars are spent each year on back related problems. Many are work related, but others are sports related, working around the house, car accidents, health issues, and even stress. If you have suffered more than three months from back pain, it is now considered chronic back pain. Although there are many causes, wearing back belts for disc injuries can be helpful.

Back support belts have been used for years to give the back support when lifting heavy loads. However, some health professionals are saying there are many  problems with these belts, such as, wearing them on a regular basis will cause back muscles to weaken, causing more problems. Wearing belts for disc injuries poses similar concerns.

Back belts are designed to provide support to the lumbar spine. They are used in ergonomics to prevent low back injury, and in clinical settings for conservative and postsurgical management of low back pain. They function biomechanically by reducing trunk range of motion and increasing trunk stiffness, which produces better stability. In general, people feel “safer” and “more stable” during physical exertions when wearing belts, which allows them to continue their activities with less discomfort.

There are studies indicating the benefits of wearing back belts which indicate significantly improve function, levels of pain as well as a decrease in pain medications used for lower back pain. Still, other studies show no benefit or poor outcomes when the belt is taken off. Generally, the quality of these studies are poor, leading to conflicting information and no studies have been specifically directed to the benefits of use for disc injuries.  Most of the studies indicate a problem with participants complying in wearing the belts.

Wearing back belts without specific injuries is curious. When using as a reminder to employ safe lifting techniques, there seems no benefit other than a reminder. For heavy lifting, the increase in lumbar spine stabilization may offer  protection from injury, especially after a sudden or unexpected load.

Supporting Back Belts For Disc Injuries 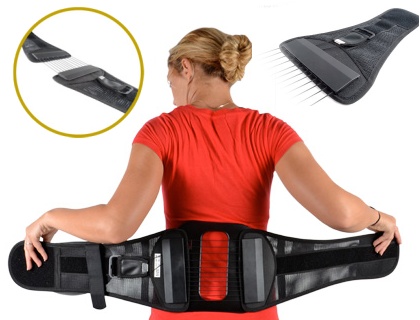 With disc injuries, additional pressure on the lumbar spine could cause further injury, swelling and reduced healing capacity. Twisting and bending, often resulting in disc injuries, can be reduced with the use of firm back support belts which restrict motion. These are not standard belts, whose purpose is to serve as a reminder to lift correctly, they must provide a superior level of support for stability, and comfort for compliance which is important when using for disc injuries.

Spinal disc injuries range from small tears to extrusions resulting in significant pain and loss of function. Wearing back support belts should reflect the range of injuries. Initially, swelling must be reduced, as well as activity level. The greatest pressure on the disc results from sitting, then standing. Lifting would place great strain on the disc. These pressures produce an effect opposite of traction. While traction produces a negative pressure in the disc, sitting, standing and lifting produced a positive pressure in the disc. This increases compression forces which may serve to aggravate the condition.

Therefore, an increase in the abdominal pressure and shifting of muscle activation levels may provide sound reasoning for utilizing back belts for disc injuries, serving to compensate for the initial injury and restoring or increasing stability. An additional benefit would be postural. In some, being overweight can have a detrimental effect on an injured disc. The further the abdomen protrudes, the more effective weight is placed on the lumbar spine. Similar to forward head posture, where every inch of forward movement of the head places an additional 10 pounds of effective weight that the neck structures are required to support, a strong and supportive back belt can help bring this weight closer to the spine and reduce the effective weight on the lower back.

Some disc injuries are not recognized as being from the disc. A disc can sustain a tear of the outer portion and not produce typical herniated disc symptoms, but be associated with protective muscle spasm. Therefore, a belt should be worn according to the symptoms, with one being worn just for lifting in less severe disc injuries, while wearing one more for daily activities with more severe symptoms.

In order to provide proper stabilization and restriction to prevent further damage, back belts need to be very stable and powerful. The typical cloth belts will not perform this function. There is also a concern regarding cheap back belts that so much force has to be placed to get the belts tight enough, that this could produce enough strain and twisting to cause further injury. The answer would be to use a back brace employing mechanical advantage. These belts us a pulley mechanism which provides ratios up to six to one; meaning, for every one pound of force you pull, six pounds of pressure is produced in the compression force of the belt.

Another option would be the added benefit of a traction feature in a back belt. This not only provides stability, but helps to reduce the force on the disc, effectively helping to create a negative force on the disc, reducing pressure while sitting or standing. This is an instance whereby wearing back belts can actually assist the healing process directly, as well as helping to prevent further injury.

According to a 2019 study, the benefits of adding traction is that it provides distractive force or decompression at the lumbar spine. The authors indicate patients experiencing this force show an immediate response.

Not everyone with disc injuries can afford the time to heal properly, avoiding unnecessary lifting or activities. In these cases, wearing back belts for disc injuries can serve an important function. Too much of anything is not good, so one should not be used for extended periods of time. As disc injuries improve, the duration as well as force of pressure can reduced accordingly.

In general, lifting with a firm and supportive belt should be done by inhaling just prior to lifting. This provides a double advantage by increasing intra-abdominal pressure as well as providing leverage produced by the belt, assisting stability and restricting motion.

Generally, lumbar support belts should only be tightened when doing heavy lifting, otherwise it should be loose. This is a reasonable approach to general disc injuries; whereas, with recent disc injuries, belts can be worn to help with general daily activities which otherwise may be difficult or impossible to do.

Everyone is different and will respond differently to wearing back belts for disc injuries. Always discuss this with your health care provider. The decision should consider the extent of injury, levels of pain, the desire for feeling more secure and your particular situation regarding the opportunity to recover without having to lift or curtail activities of daily living.